Again the site at Six Fours Plages was hard to leave as it was such a lovely little site and area but we need to move on if we want to be in Croatia by the beginning of May.

We spent one night at Cavalaire Sur Mer, France that was advertised in the ACSI book.

The campsite was just a 5 minutes walk from the marina and although it was nice we had walked around the town and marina and had seen it all in an hour and a half.  The campsite was quite nice with pool, shop, restaurant etc although there were a lot of teenagers around the pool and reception area. Most of the other sites we have been to we haven’t seen many children/teenagers and it has been very quiet.  In most other sites we have had the pool almost to ourselves. 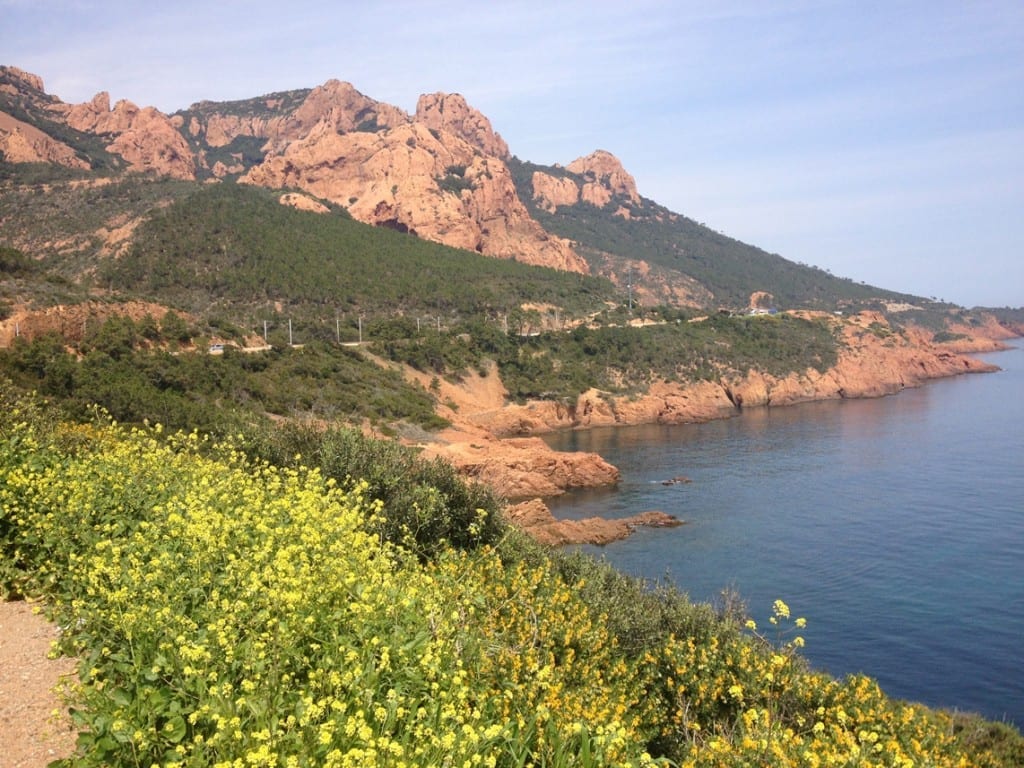 The next day we drove along the beautiful coast road between St Raphael and Cannes in the French Riviera, the Esterel mountains’ are striking with their red rocks and their jagged crest lines and pitons above the Mediterranean sea. There are plenty of places to stop and take pictures. It was so lovely it reminded us of our recent trip to America and the Big Sur. 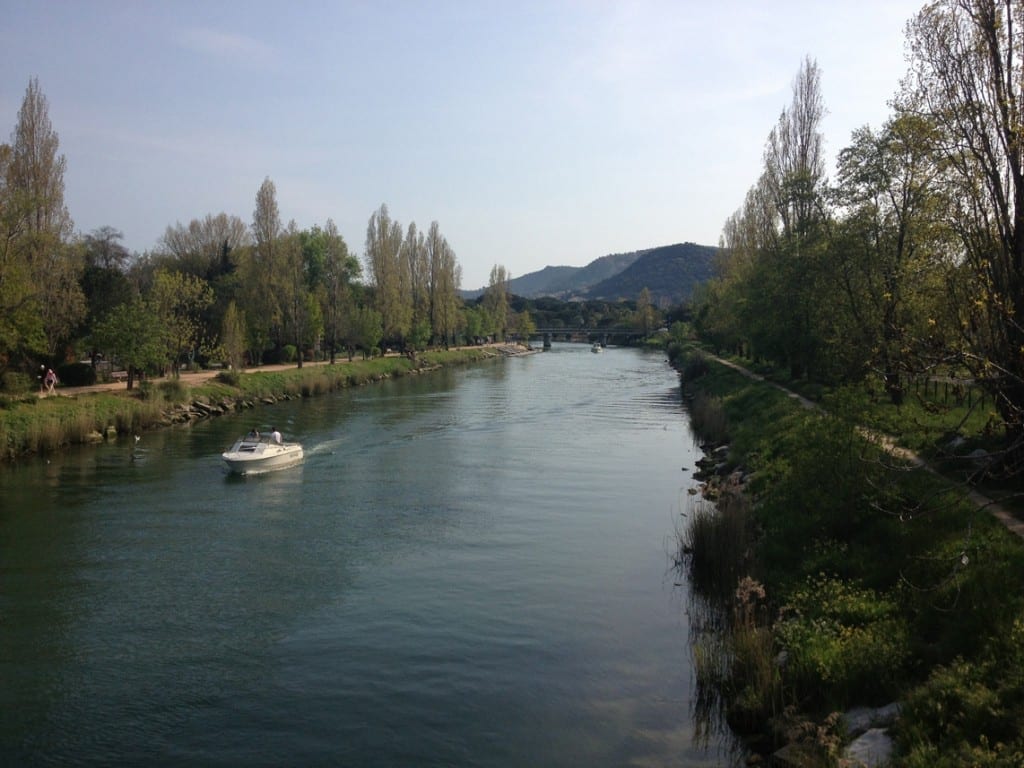 Riverwalk to the promenade

We found a very nice campsite that was again very near to the seafront.  Once we set up the van we walked to the promenade.  It was so nice as we were able to walk down the river until it opened out to the sea with miles of lovely sandy beaches.

The bus stop was just around the corner from the campsite which was really handy.  This is the first time we have used public transport on this trip and we were a little nervous as years ago when we visited Tuscany we got a train from Cortina to Florence. Getting there was ok but coming back we struggled to find the correct platform in the large busy railway station and couldn’t find anyone that spoke English to help us.  Once we finally found the right train it was dark and we couldn’t see the names of the stations when the train stopped and was so worried we would miss out stop.  Not understanding a word of any announcements made it difficult too. Somehow we managed to get off at the right station in the end but I must admit that put us off doing it again for a while.

Our day in Cannes was great and we really enjoyed walking through the lovely narrow streets browsing the shops and looking at the lovely old buildings. We stopped for a sandwich and coffee and took our time people watching, which is an activity that apparently takes a lot of visitors to Cannes. We particularly enjoyed watching the locals across the road.  There were a group of French office workers in their shirts and ties playing boules and others in twos or threes sitting on the benches eating their lunch. The Spring sun was shining with just enough heat to totally relax us.

The bus stop wasn’t too difficult to find for our return journey at the end of the day although the roadwork’s made the journey a lot longer. At least we had a seat so it wasn’t as bad as it might have been because the bus was crowded and hot (until the driver remembered to turn the air conditioning on). It made a nice change for Ray not to have to drive.

That evening we decided to treat ourselves to a meal out and just outside the campsite was a restaurant that served a buffet for 17 euros each.  We thought this would be a good opportunity to try a few different dishes.  The buffet consisted of a selection of cold starters, smoked salmon, prawns, stuffed eggs, noodles, calamari, cold sliced meats, salads and lots of other dishes. We tried a little of quite a few of the dishes then moved onto the hot dishes where again we tried a bit of everything then went back for more of our favourite which was beef and carrots cooked in a creamy coconut sauce with rice.  Well, we were really stuffed after that and we still had the delicious looking desserts to try next.  We left it about 45 minutes before trying the desserts – and no we didn’t try a little of each although we did have 2 slices each (well they were really thin slices).  So for 17 euros each, it was really good value for money. 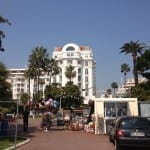 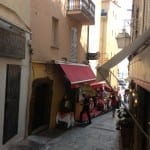 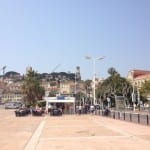 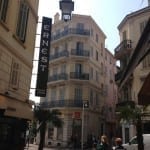 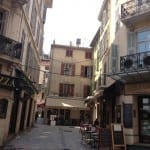 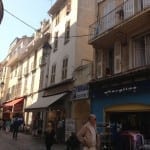 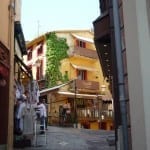 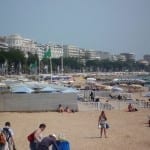 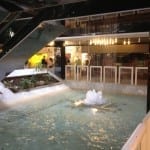 The drive through to Italy the next day took us through Nice and Monaco.  Again it was a lovely drive with stunning scenery. I would have loved to stop off at Monaco. It’s been about 20 years since we were last there. We will have to make sure we do it next time. 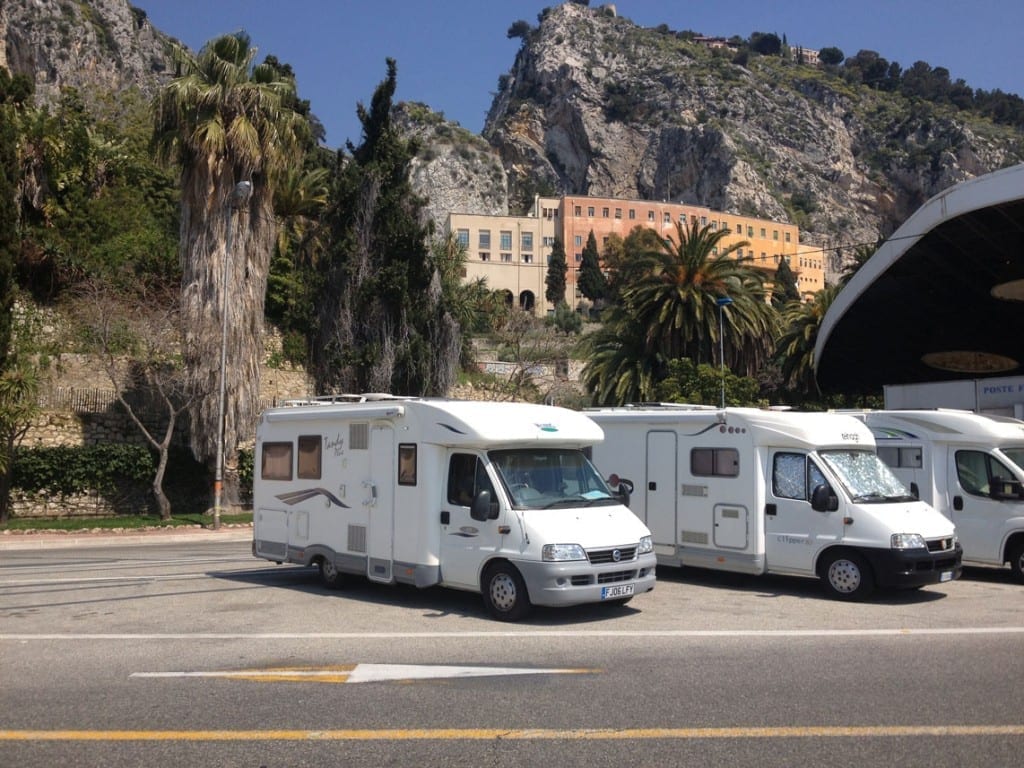 We stopped at the French/Italian border, which isn’t in use now, as you just drive straight through.  There were quite a lot of other motorhomes parked up so we decided to join them and had our lunch looking back at the view of Monaco in the distance across the beach. 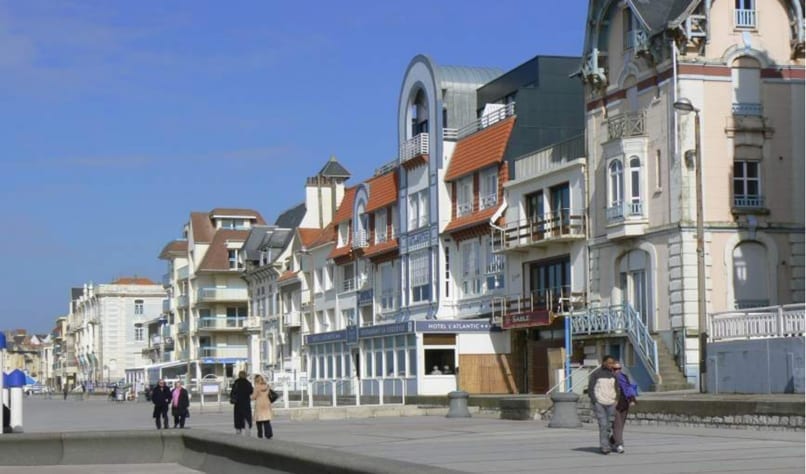 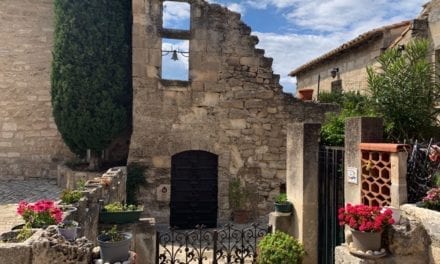 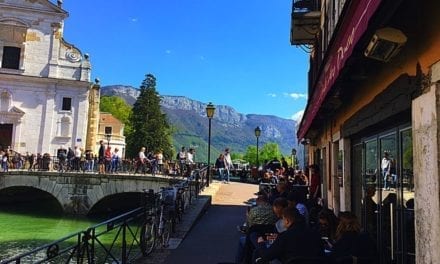 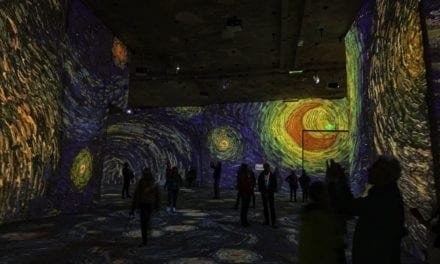 The Magic of Carrières de Lumières in Provence