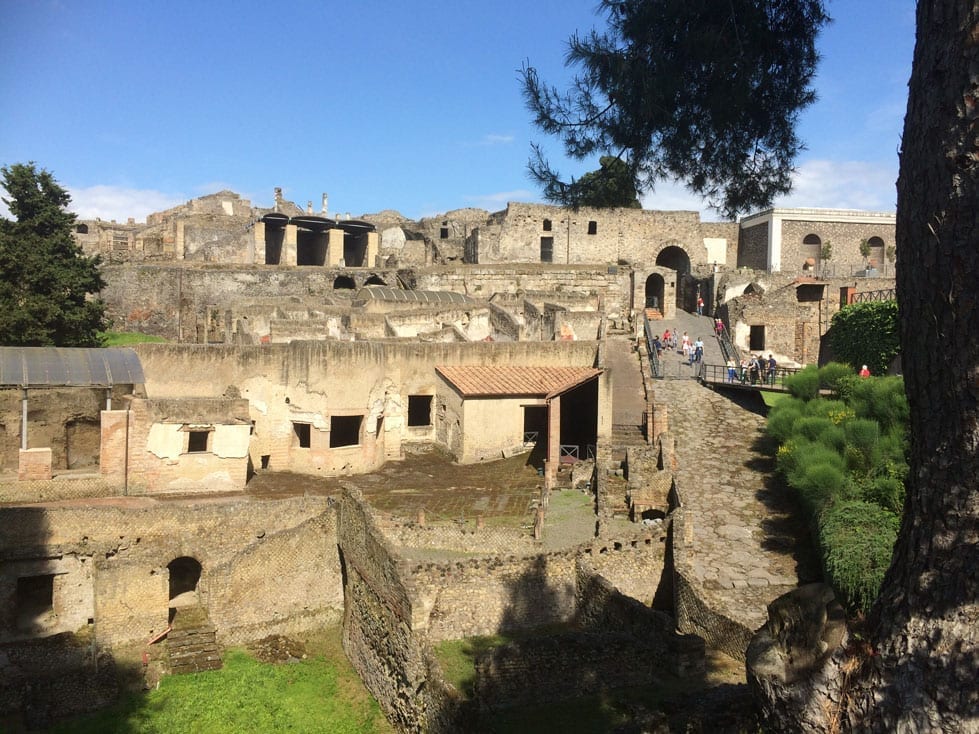 Visiting Ancient Pompeii is a fascinating experience and so much better than we had expected. The whole place is a lot bigger than it looks from the outside too. I knew nothing of Pompeii and Vesuvius before we visited the ruins and I do regret that I didn’t at least do a bit of research on the internet or look through some guidebooks first. Luckily Ray knew a bit and filled me in as we were going around. 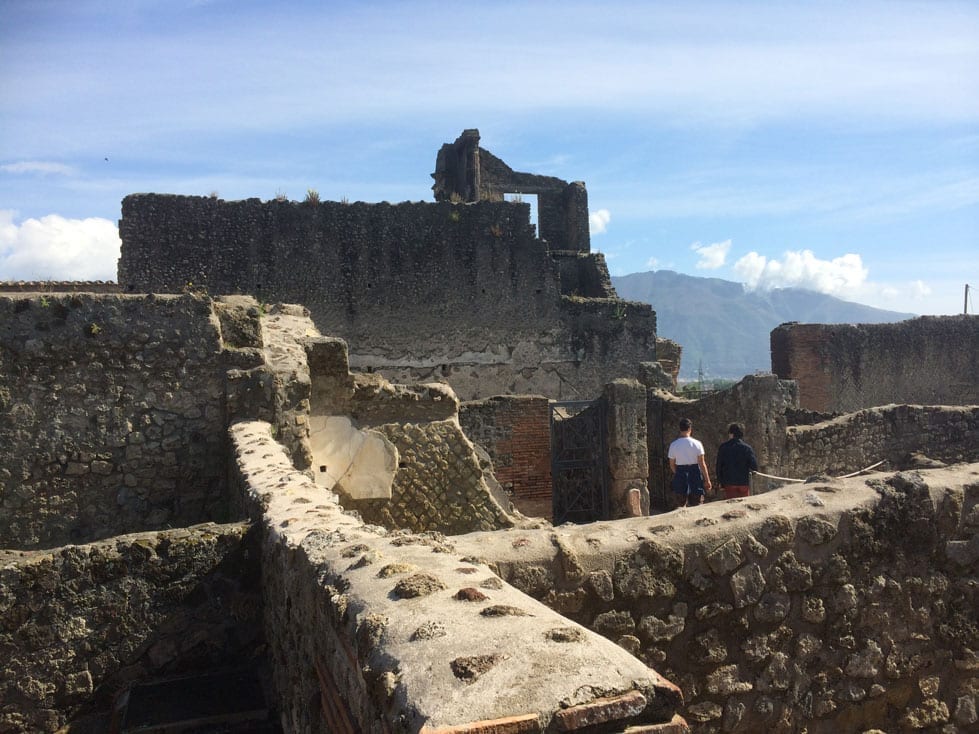 Pompeii is indeed something you should experience while in Naples/Sorrento/Amalfi Coast.

Visiting the ruins is an easy day trip if you are staying in Sorrento or Naples as you can take the Circumvesuviana train from Sorrento or Naples to Pompeii Scavi for approx. 2.20 euros return. There is no reason to take an organised coach trip here as it is so easy reach.

Tour guides are waiting by the kiosk on the station, and for 10 euros each will take a group of around 10. Of course, you still have to pay your 11 euros entrance fee on top of that. When you come out of Pompeii Scavi station turn right past all the orange and lemon kiosks and the entrance to the ruins are 100 m on the left.

We were not offered a free map and didn’t realise we could have had one until we were inside and it was too late. It would have been much easier with a map. 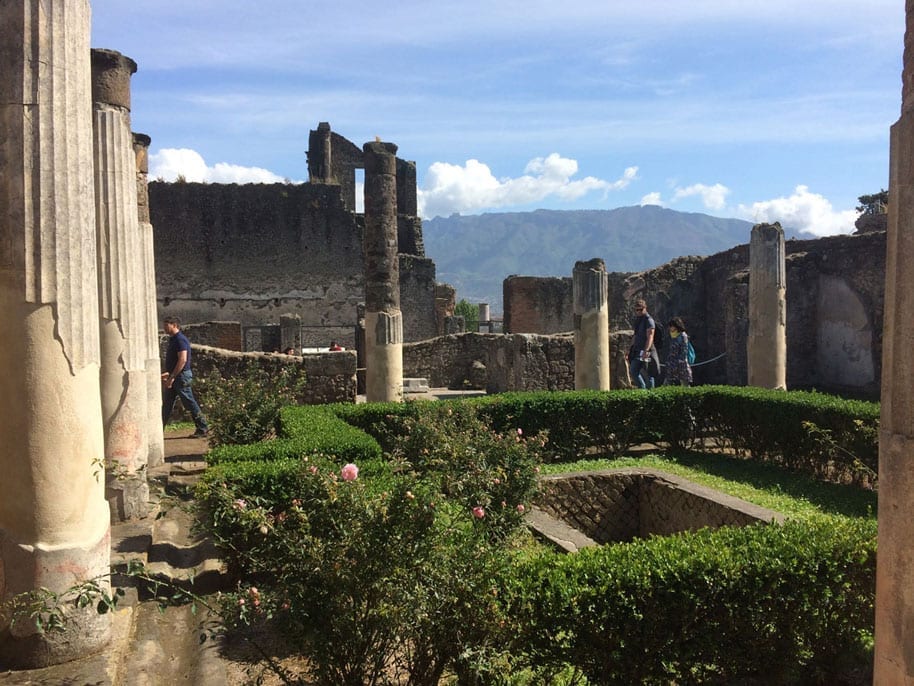 Pompeii is a Roman town frozen in time, thanks to a devastating eruption of Mount Vesuvius in 79 A.D. and buried beneath a blanket of ashes and lapilli that was several metres thick in some places. It is now a significant archaeological site that provides an amazing glimpse into the daily life of an average Roman town over two thousand years ago. 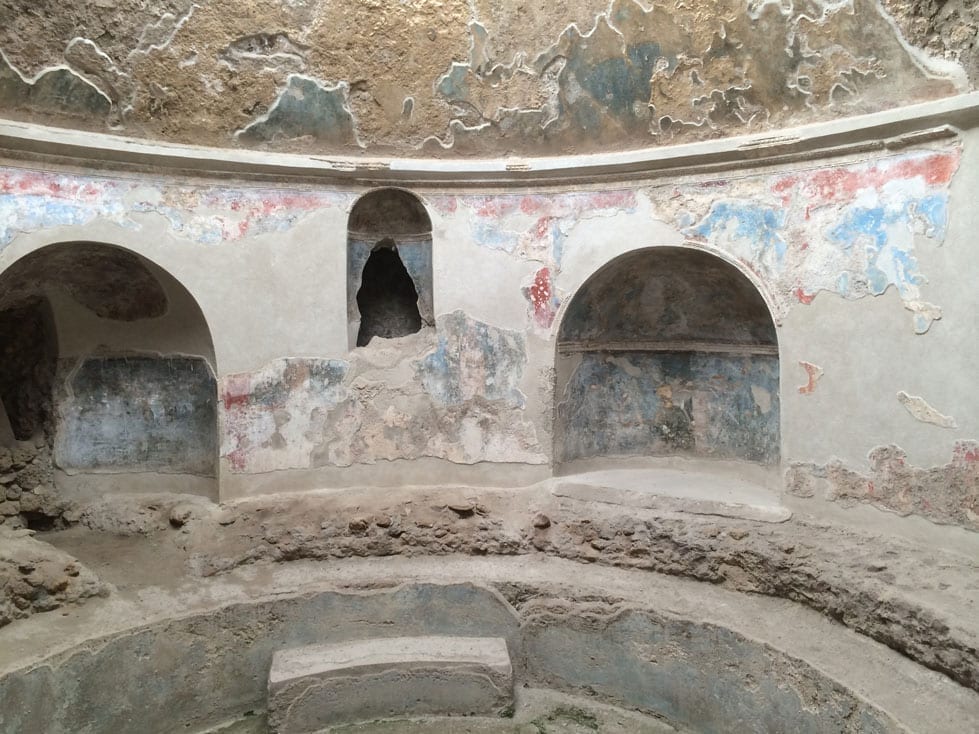 The excavation has brought to light the small details of everyday life in the city.  The kind of things that are generally lost during an archaeological dig. The atmosphere is incredible. You can really feel the history and picture of how the people lived when you walk along the city streets and into the many building ruins. It gives you a sense of what those people went through. It’s a bit strange and eerie walking around a place that was so suddenly left in ruins. It stands ominously in the shadow of the still active Volcano, Mount Vesuvius, which is like a big monster that is sleeping in the background. 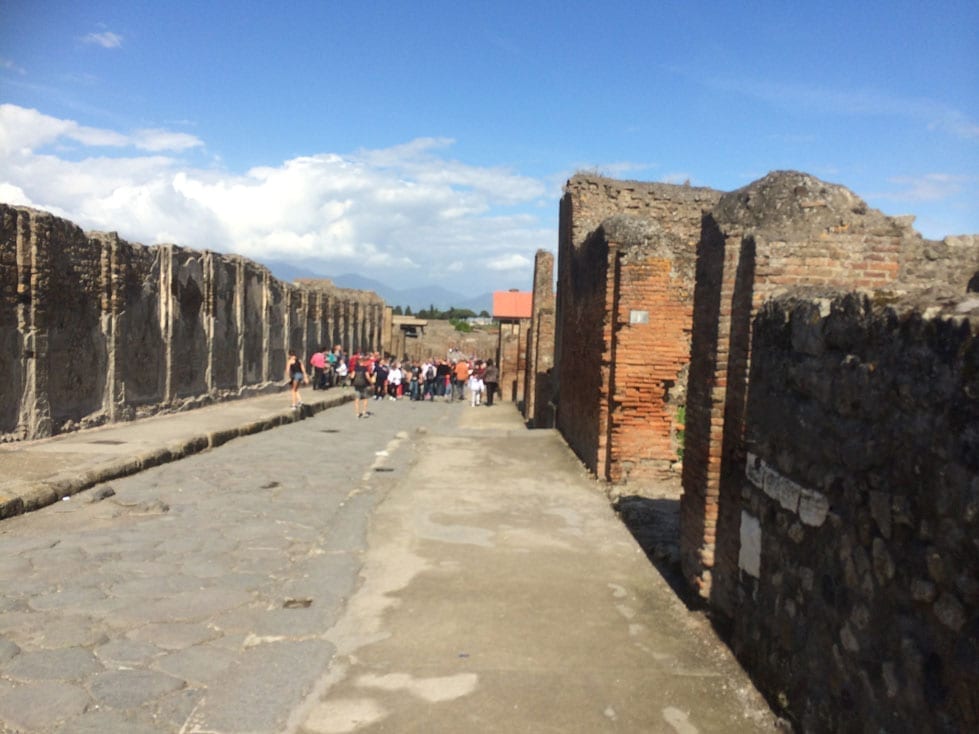 Numerous different buildings from modest to majestic included roman shops, baths, bakeries, villas, temples, theatres, and an amphitheatre.  Also the famous brothel and there is even some of the graffiti that’s still visible on some of the walls!

We walked down the streets in and out of the buildings. There were amazing frescoes and marble floors also several humans were preserved in their final state and posture which was very moving.

They even had running water in some of the richest homes which makes you realise just how advanced the Romans were. 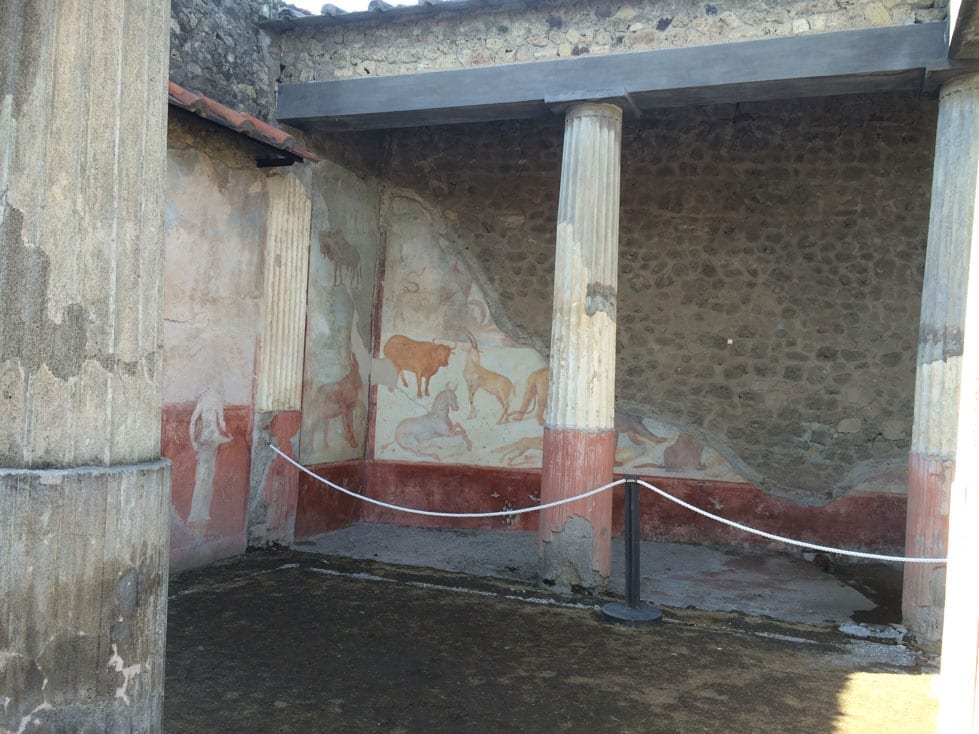 We spent a couple of hours there which is probably the minimum to get a good feel for the place and thoroughly enjoyed it. The only reason we were not there longer was that I felt starving and then felt a bit shaky because my blood sugar started to get a bit low. We didn’t have a map and couldn’t see anywhere to get any food.   I did read afterwards that there was a restaurant on the site. I sent Ray round to see a little more on his own while I sat on a rock in the shade. We then went outside to the Café opposite the ruins. 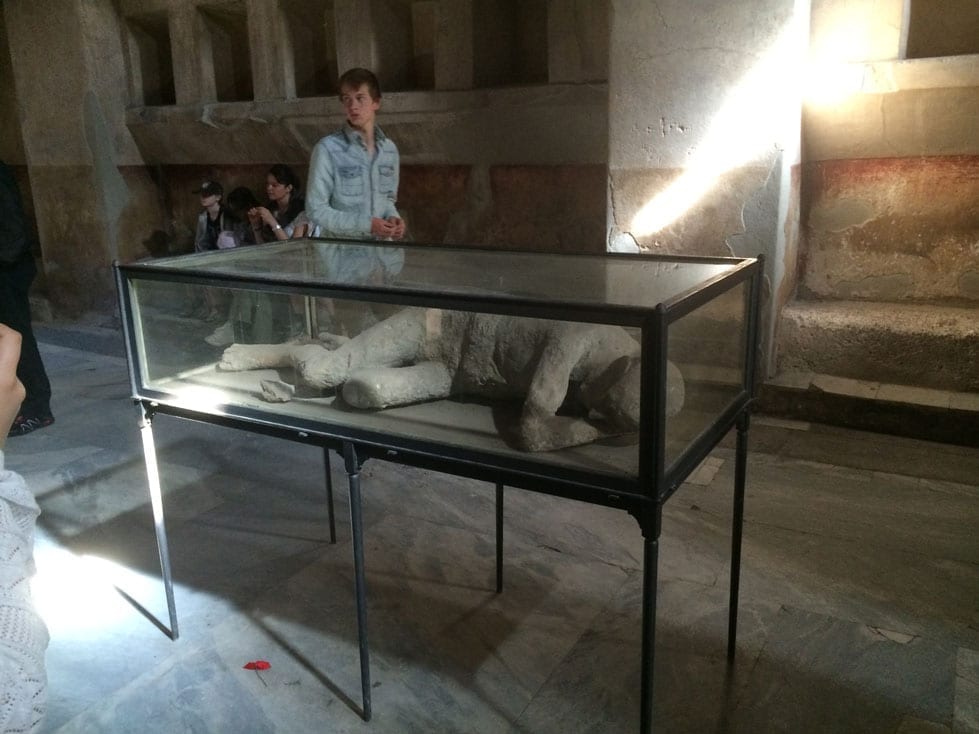 Unfortunately, once you come outside, you can’t go back in without paying again.

The Café outside turned out to be expensive (we should have known better really as it was outside a popular tourist attraction). We had two coffees and one pastry which cost 17 euros (11 euros for the coffee). Ouch! 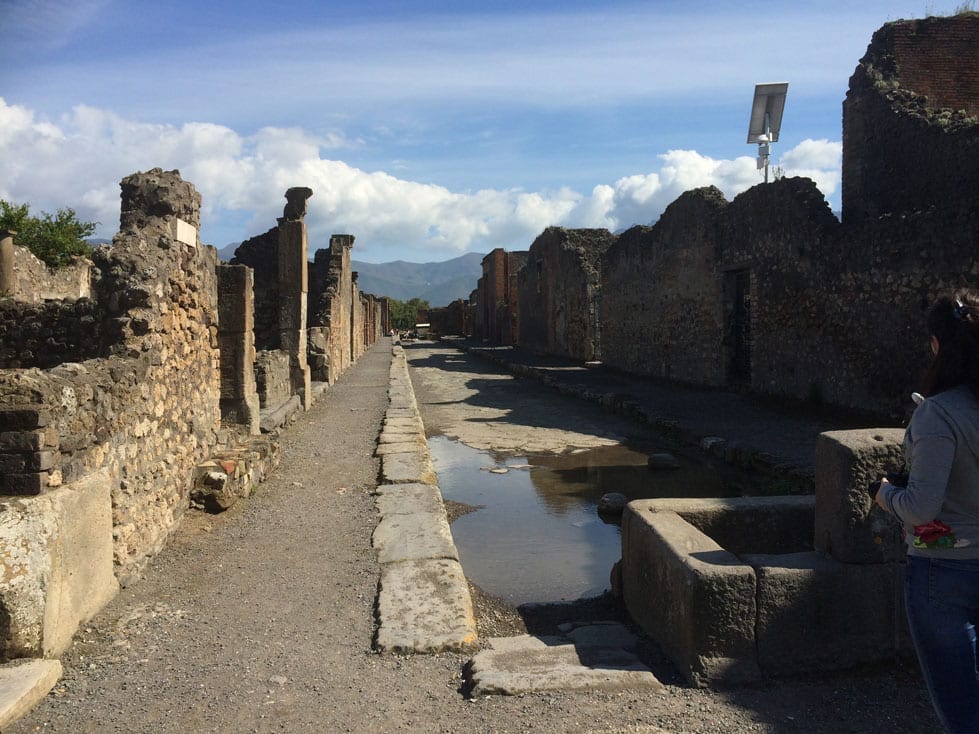 Next time we may well visit Herculaneum which is about 20 minutes from Pompei by train. Although the ruins at Herculaneum are less extensive than Pompeii, it is in a far better condition. Both sites Pompeii and Herculaneum provide a fascinating insight into Roman life in the setting of wonderfully preserved cities bringing the whole thing to life. 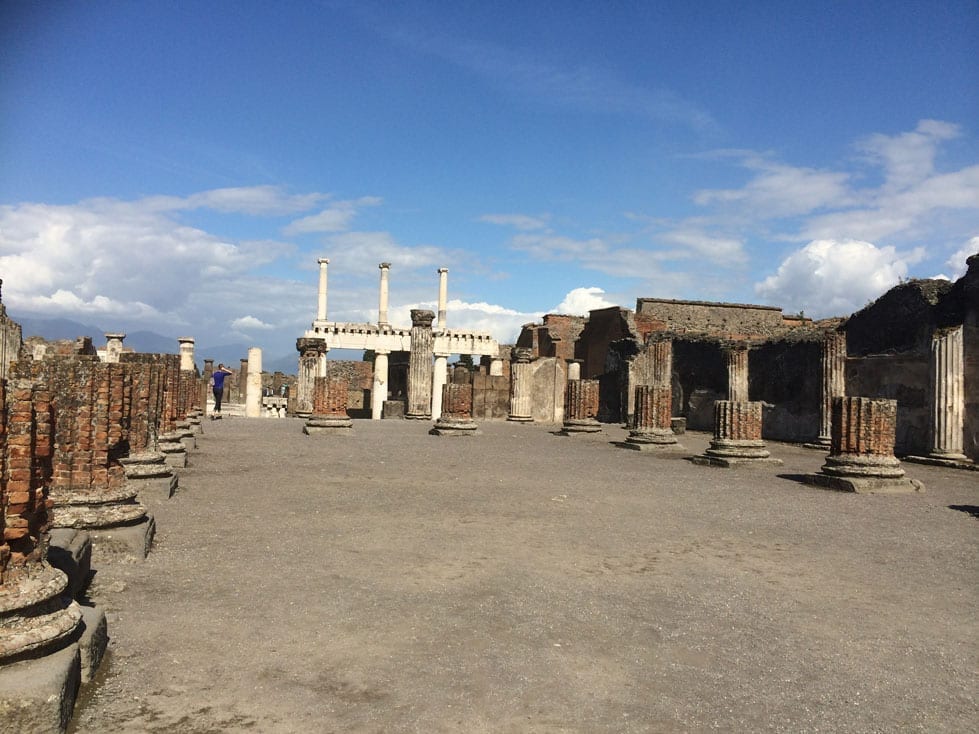 Many of the treasures of both Pompeii and Herculaneum have been removed and are in the Archeological Museum in Naples, so the museum is another place we intend to visit next year. 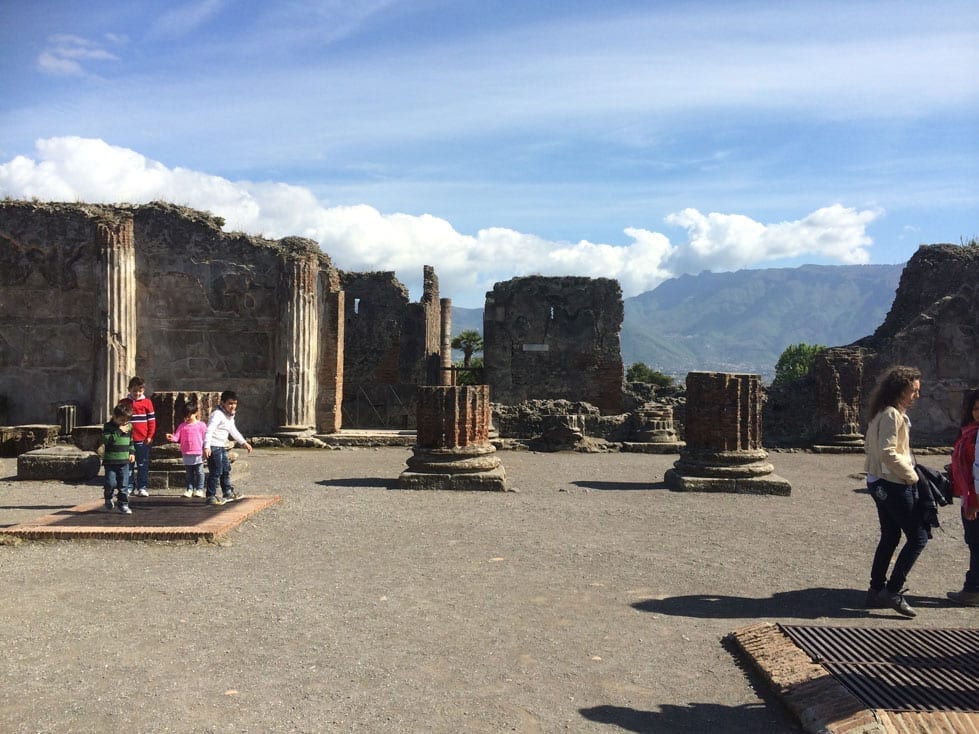 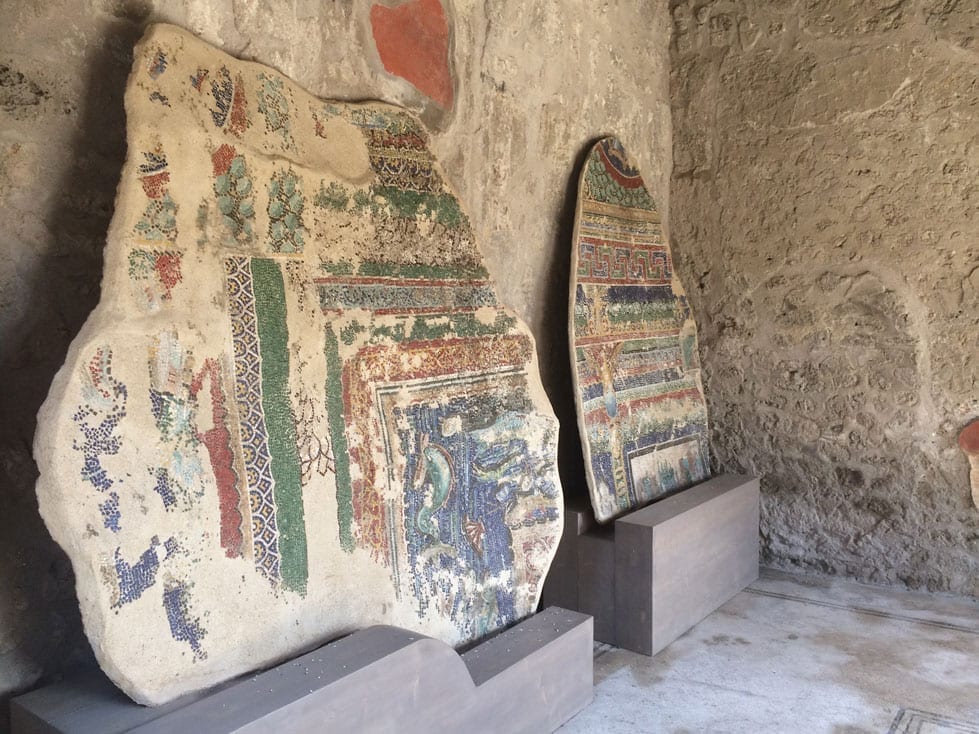 I have since downloaded Rick Steves audio Europe guide for my iPhone which includes lots of info on Pompei and many places in Italy. Click the following link to download the app in iTunes.   Rick Steves’ Audio Europe™ – Rick Steves

Unfortunately, while we were visiting there was a lot of renovation and repair work going on, and there were barriers preventing access to many areas. 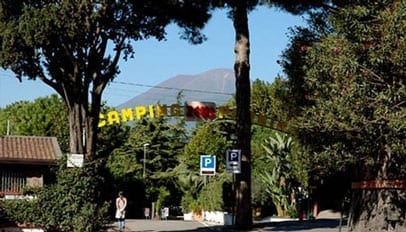 We found Camping Zeus in the ACSI book and was so pleased when we pulled up outside the camp to find it so ideally situated for the ruins and the station into Sorrento and Naples. These were, however, the only positives with the campsite.

The first part of the campsite has been turned over to a car park for the day trippers to Pompeii to park their cars which meant fewer spaces for the campsite. The actual pitches were tiny, cramped spaces. Most people had trouble manoeuvring their motorhomes in without hitting the low-level orange trees which were very close together. This pitch was probably the tightest spot we have ever had to park our motorhome in, and there wasn’t any room to sit outside.  The toilet facilities were adequate although the bins were overflowing.

That said it is still a good spot if you are out all day sightseeing. From here we travelled on the train from Pompeii Scavi station to Naples one day which was only half an hour away and then Sorrento another day (half an hour away in the other direction). Both stations were the end of the line which made it easy.

The entrance to the ruins and Pompeii Scavi station were both a few hundred yards outside of the campsite entrance. There were many restaurants, cafes and stalls selling drinks and food along the road, although they are costly.

Where to stay in Pompeii 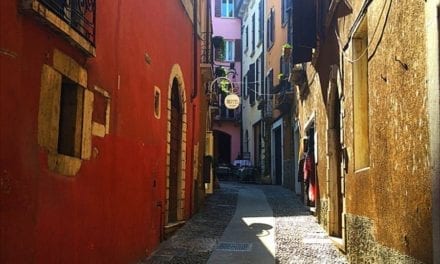 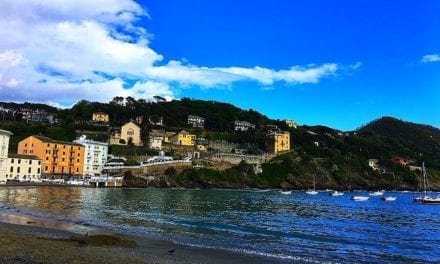 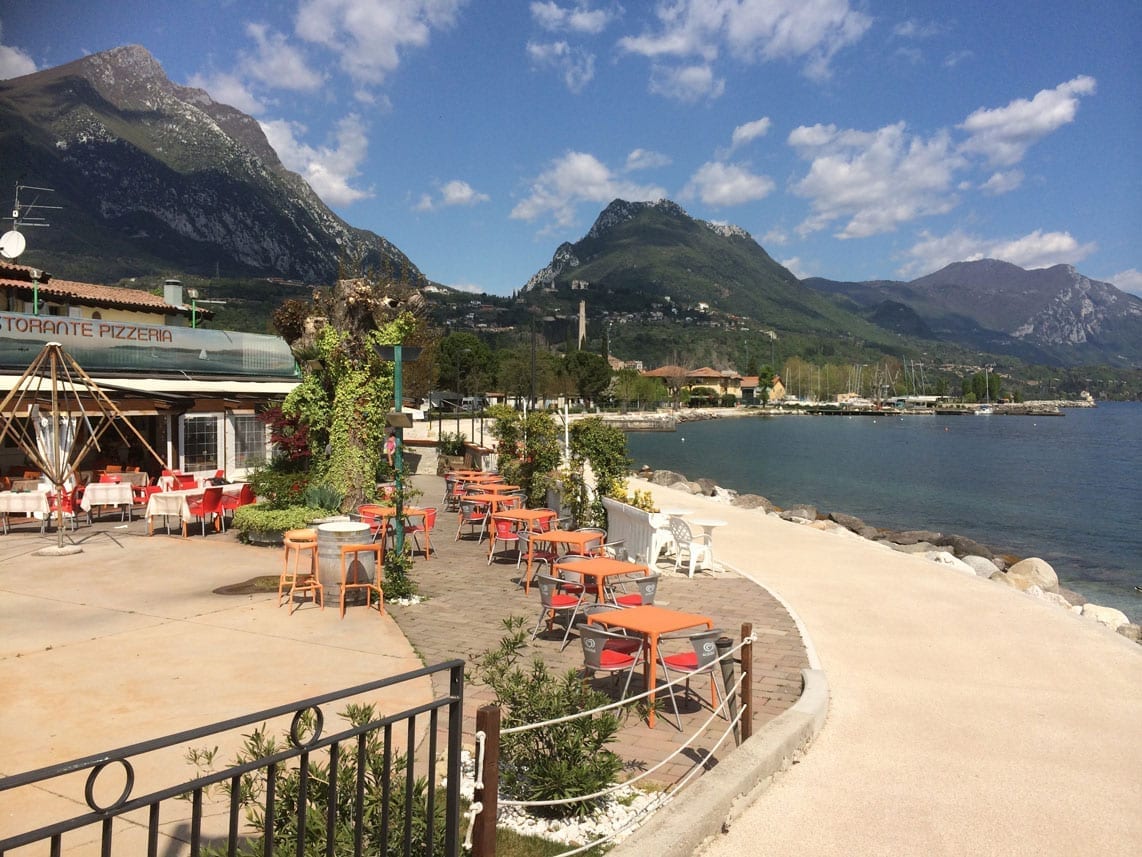 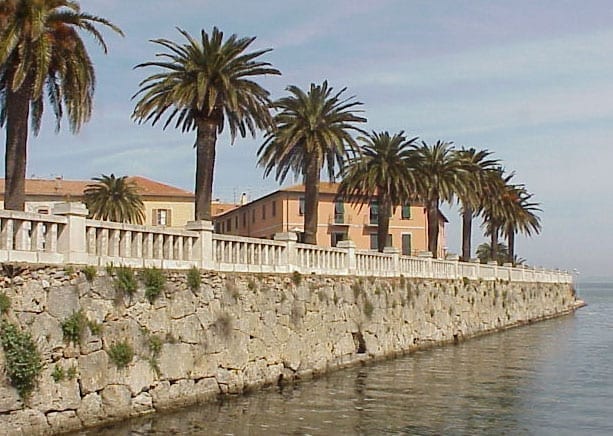